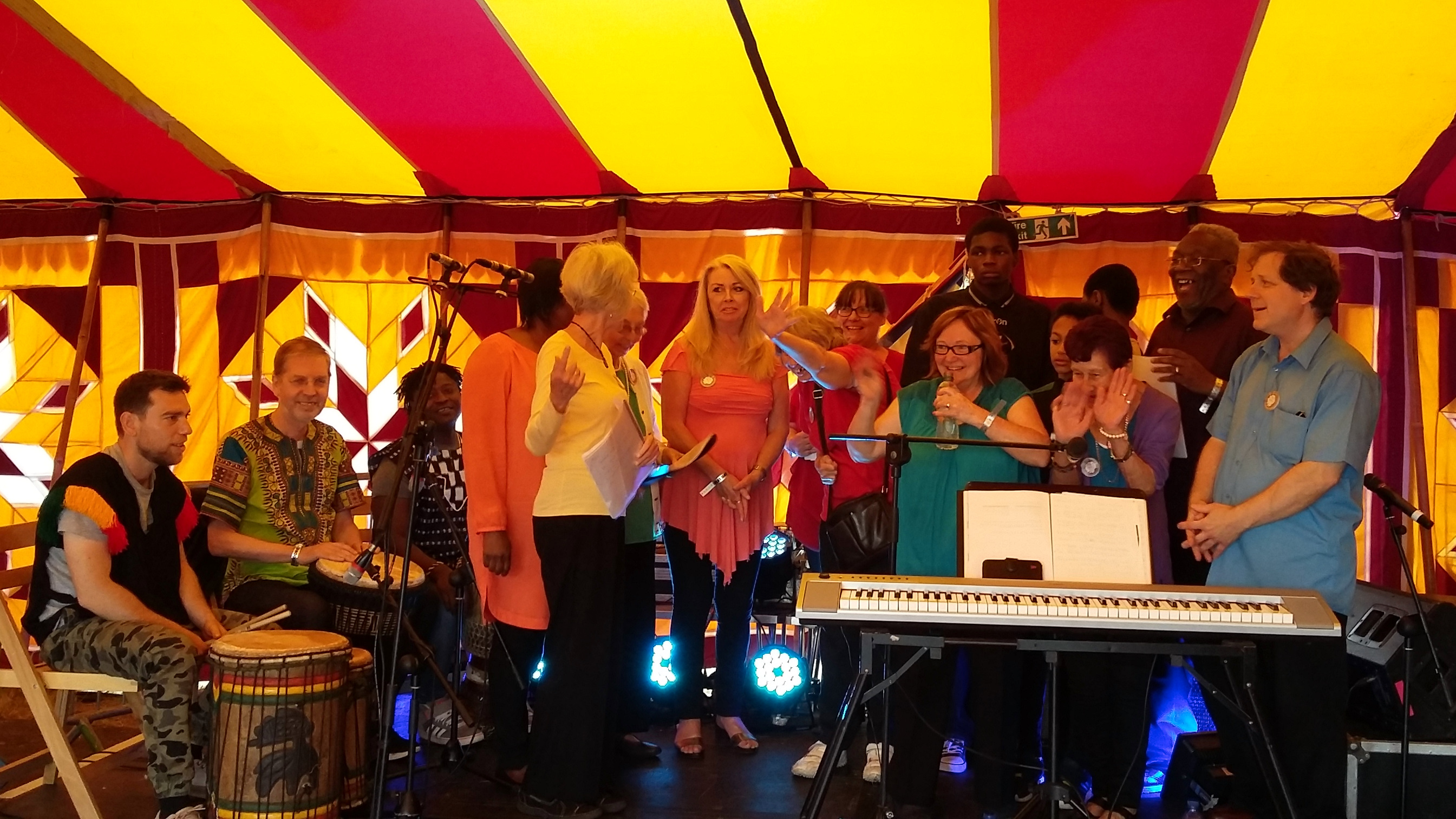 The Bellingham Community Gospel Choir grew from a gospel choir workshop which Christ Church United Reformed Church in Bellingham organised as part of its 90th Birthday celebration in October 2013.

People were surprised at picking up the songs quickly and enjoyed themselves tremendously. They said how good it would be if there could be a choir in Bellingham. And then the Lewisham Small & Faith Fund announced that small grants were available and Christ Church put together a proposal for six months professional input from Santino who had voluntarily led the workshop in October.

The grant was awarded, and the choir started in January 2014 with 12 people. The aim of the six month project was to sing at the Bellingham Festival in June 2014, and that’s what happened. The Choir took part in the opening blessing and also sang at the end of the afternoon. Along the way the choir had started to get requests to sing at local community events.

The choir resolved to keep going and was further helped by a grant from the Bellingham Assembly Fund in Autumn 2014.

The benefits of the choir include new friendships, greater confidence, better breathing, regular exercise, and consolation during some difficult times. The audiences enjoy the energy and uplift which the choir bring to their performances.Many of the choir participants are people living with chronic illness who look forward to Tuesday nights when the choir sings together. Members have voluntarily contributed over £3,500 from their own resources towards running costs during the five years of the choir’s life so far, enabling it to be open to everyone.

2015:  taking part in a Community Concert which raised nearly £700 for a cancer research charity; singing at the Wildcat Wilderness’ Harvest Festival in a Catford allotment;  the choir’s own concert with food and fireworks in November.

2016: leading the Bellingham in Harmony project which drew together a group of singers and drummers to perform at the Lewisham People’s Day and the start of the Downham Parade; performing Christmas songs at Lewisham Station in aid of Health Poverty Action; singing for a new Sunday evening informal service at a local Church of England.

2017: held another community concert; initiated the first Bellingham Big Sing to bring community groups together for the annual Bellingham Festival; sang Christmas Songs in the open air for the Friends of Forster Park as well as a return visit to Lewisham Station for Health Poverty Action.

2019: took part in Jam Tomorrow based at the Fellowship Inn before its re-opening….

We continue to look for ways in which soulful singing can raise the spirits of the people around us.